The Humanist Special Collection is proud to work with the First Unitarian Society of Minneapolis (FUS) to make available this collection of sermons and public speeches given by Rev. John Dietrich. Dietrich was an early leader and visionary of the congregational Humanist movement in the United States in the early 20th century. Called to FUS in 1916, he was encouraged to shape a less theistic view of Sunday community. Because of his growing popularity in Minneapolis, he began speaking to large audiences in the downtown Garrick Theater and through regular radio broadcasts. 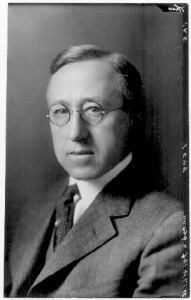 John Dietrich’s one-hour addresses offer a unique look at the issues of the early 1900s. Dietrich’s talks often focused on scientific methods and discoveries, with a particular focus on evolution; biographies of intellectual leaders; ethics around family, birth control, capital punishment, labor; and global challenges including fascism, communism, anti-Semitism, and militarism — sandwiched as he was as a minister between two world wars. Talks included: “The Inadequacy of Socialism,” “The White Slave Traffic,” “The Message of Nietzsche,” “Is Evolution True?,” “Will Modern Education Destroy Religion?,” and “Shall Women Be Free?”

These digital resources were compiled thanks to a Legacy Grant from the Minnesota Historical Society in 2017-18 and the hard work of First Unitarian Society of Minneapolis. It represents a summary of Dietrich’s talks from 1916 to 1938, with keywords, Library of Congress subject headings, and brief descriptions, to help researchers and general readers assess the content, and location, of nearly 500 addresses.