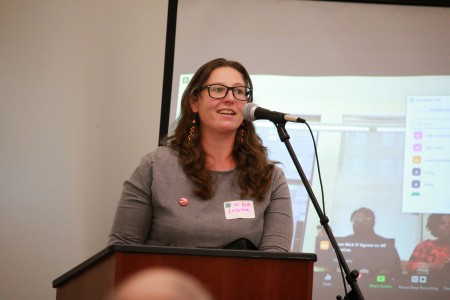 Meet Dr. Kate Lassiter, Senior Director of Lifelong Learning who leads our Leadership Institute for Growth, Healing, and Transformation — LIGHT! We asked about her career, her perspective on Unitarian Universalism, and her hope for Meadville Lombard.

ML: What has been your journey so far in your life and career? How did you end up at Meadville Lombard?

I'll start with where I am. I'm the Senior Director of Lifelong Learning and LIGHT and an affiliate faculty member at Meadville Lombard. Prior to this, I worked at another seminary in Chicago and was doing more place-based learning. Before that, I spent time as an Assistant Associate Professor of Religious and Pastoral Studies at a small liberal arts college in Ohio. My Ph.D. is in Religion, Psychology, and Culture from Vanderbilt University, with minors in Community Action and Research, as well as in Theology and Practice. I have a Master's in Theological Studies from the University of Dayton. My BA is in Theology and Philosophy from a small, little, tiny college called DeSales University in Pennsylvania. I grew up outside of DC, Northern Virginia, mostly. Went to a Catholic high school. I feel like this is part of the long journey.

If you say, "How did you get to this particular place?", I see it as a series of blessed incidents as well as unfortunate mistakes. That’s probably the way that many of us make our way through our careers, just kind of trying to find what works and to see where we're drawn. I can think about a few key moments that I've had where I just really felt a sense of belonging and being called. I don't know if I even had that language of “being called” at the time. Some of my earliest church experiences were actually in a Southern Baptist church, but besides that, in a Catholic church, so you don't really hear that a lot, especially speaking to women inside of those traditions.

At the same time, I saw places where women were thriving. I remember I had this one nun; her name was Sister Ellathere, and I had her in high school. She taught Morality class. She taught Hebrew Bible.  I'll never forget that she used to always say, "Every existence is a graced existence." There was something about the way that she would say it and the way that she would talk that just captured my imagination and made me see the world in a different way.

I went to school thinking I was going to be a pre-med major, because I thought that's what people should do: follow the science route. I had this one moment of thinking, "I want to help people and I want to be with people, but I don't think that this is the particular modality that is for me." I had a really powerful moment of searching and being open to the movement of spirit. I was sitting in a chapel feeling like spirit was calling and saying, "Well, you don't have to follow a pre-med track. You can look at things like philosophy and religious studies and theology and pursue those things." I felt like a door opened and I had this experience of the new minister divine. Along the path, it’s taken a lot of different routes.

I went from some of my earliest experiences at a Southern Baptist church in Vacation Bible School, and now I work at Meadville Lombard. It’s a trajectory, I hope, toward liberation and development and growth and ultimately, toward transformation. I think that's one of the reasons that I was so drawn to this particular set of work. For me, the work has never been, "Oh, well, it's about lifelong learning," or "You need to get this certificate," which is one way to think about this and our programs. The work isn't that. The work is about emancipation, trying to identify the emancipatory potential that is within every human individual and the ways that it can manifest in society.

ML: We’ve spoken to some Meadville Lombard students who knew they wanted to be ministers from when they were young. Maybe it was a high school teacher who said, "You should think about this.” We’ve spoken to others who had full careers in other fields and then made the switch. Can you say more about the anecdote that you described of wanting to go into pre-med and then feeling a call in another direction? Was there ever a time when you were on a different path, and you made a deliberate choice to go toward this religious life that you're in now?

Religious News Service publishes a little digest every single morning, and this morning they were talking about all the different colleges and universities that are terrible with Title IX or have outright policies that deny the full humanity of people's gender and sexuality. I was looking at this list and thinking, “I could have easily stayed in a place where this is the norm.” I was thinking about that in light of the work that we did at Convocation to invite people to campus to talk about reproductive justice. We are breaking it out of that framework that's pro-life or pro-choice. Those concepts are so delimiting when we're talking about sovereignty, about emancipation, about autonomy, about human and social development and the way that our spiritualities and our understandings of our faith can either support that or denigrate it or do nothing.

After I finished my bachelor's degree, I got a job working with folks with developmental disabilities. I think I easily could have stayed in that kind of work, gone on and gotten a master's in Social Work or a master's in Counseling, or something like that. That didn't feel quite right for me. There was something else that just kept tugging at me, although I was still taken with all the questions that came out of that experience.

So I got into a master's program. I ended up writing a thesis, thinking about an ethic of housing for people with developmental disabilities. I took that, and made it a part of working out the way that if our commitments or our theologies are one thing, what does that mean for actually living out into the world? Later on, I finished that master's degree. It's hard to know exactly what you should do with a Master's in Theology if you're not going to be ordained, but I knew that I loved higher ed and I loved writing.

I had gotten a chance to teach in my master's, just a course for my second year, so I ended up doing some work with a university and doing service learning with them for about two years. That gave me insight into thinking about place-based learning, about service learning, about how do we bring institutions like schools together into communities and use them and leverage those institutions to transform communities. How do we literally start to embed it into each of our classrooms, into the whole curriculum that gets developed, into courses, into people's research agendas, and into the larger minds of people like administrators and Board of Trustees members?

I wanted us to see the hard work that goes into thinking through that, and really being committed to a place — not just being located in a place, but to be of and from somewhere, to really love the people that you're with, to love the community. There are so many ways that higher ed, even the most humble institutions, can still feed a sense of separateness. I remember I was literally looking over a contract between us and a national partner, and there was a phrase in Latin. I was with my colleague and he said, "I don't know what that means," and I looked at it and I translated it. He said, "How did you know that?" And I said, "You didn't grow up singing church Latin?”

It’s those kinds of everyday moments that start to strike you with a thought of, “Oh wow, there's been something at work in my life. I've been responsive to something.” There are many ways to think about the call, whether it's us in response to something, or something calling us. Maybe it’s the god of our own understanding, the numinous, the divine, the holy mystery, any of these kinds of terms that begin to capture that, or seeing that there's something different in the way that I'm made up and that there's this sense of restlessness until I find this place. There was a need to find the place where I can do the work that really fulfills my soul and helps lead to my own transformation. That’s very Augustinian.

That meant that once I translated that phrase, I thought, "Well, I've got to apply for a Ph.D. program.” That’s kind of weird, right? I was translating a Latin phrase from a legal document between two organizations and I thought, "Oh, now I've got to apply for a Ph.D. program," but it made perfect sense to me. For students who are thinking about whether they should respond to a call, my advice would be to pay attention to the daily movements. Not everyone gets a grand gesture, but it's often in the daily matters that we really come to see our call and our purpose, that we understand our passion and how to live deeply into it.

I have to start out by saying that I am a newcomer to Unitarian Universalism. Part of the reason that I'm so drawn to a place like Meadville Lombard is because of the deep commitments that are held in the faith and in the tradition. What I appreciate most is that there's a way of holding complexity that is not always possible in other traditions. I'd like to see more ways to hold that complexity, and I would call us to a deepening of wisdom and maturity around that.  Our charge is to hold various ideas in good tension and to move forward.

Unitarian Universalism is a place for people who are holding a set of tensions, so let’s be open and welcoming to those tensions as they arise, in all the ways that they arise. In terms of the spiritual traditions that form us, I personally have influences from Southern Baptism, Roman Catholicism, I teach yoga, and I work at a Unitarian Universalist seminary. It feels like a very full circle. Not even a circle, maybe more a spiral, and yet it's all-informing.

To the question about what kind of role Meadville Lombard plays or what kind of place it has for it in our world, I had this moment earlier this week where I just had this immense sense of gratitude for working at Meadville. I posted a little something on Facebook to the effect of, "We don't shy away from the transforming work." At Convocation, with our reproductive justice panel, I don't know any other seminary that has been brave enough to bring those kinds of thinkers to campus. If we're going to talk about future in people's faith, young adults, how can we not attend to reproductive justice?

We can talk about why all the other traditions are dying, but there's an opportunity here at Meadville Lombard. It's a liberating space. It's a space where we're doing the transforming work, and where there’s the openness and possibility for it. There's welcome here.

Dr. Lassiter has broad expertise in the role of religious practices in public strategies for healing and justice, theories of recognition, and feminist and queer theology.