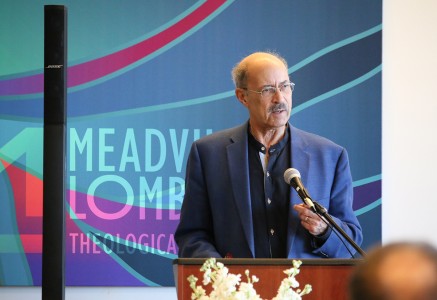 We congratulate Rev. Dr. Bill Sinkford on being named the recipient of the 2022 Award for Distinguished Service to the Cause of Unitarian Universalism, one of the most prestigious awards given by the UUA. We asked him about his ministry journey, his hopes for the future of UUism, and Meadville Lombard's role in them.

ML: How did you become a minister? What is your career path and story?

It's a long and somewhat complicated story that I'll try to give you in short form. I was very involved in Unitarian Universalist youth ministry when I was young. I served as the president of the Continental Youth Organization and imagined going directly into ministry after college. But that was in the era — it's called the Black Empowerment Controversy — when Unitarian Universalism (which had been out front in support of the civil rights struggle) made financial commitments to Black empowerment and then reneged on them. It was a real sense of betrayal for me and for more than a few other people of color that had been attracted to Unitarianism and then Unitarian Universalism. I left at that point and wandered in the wilderness religiously for about a dozen years, and then was called back when my mother died and a friend of hers from my home church stood up on my porch with a terrible casserole and stories of my mother that allowed me to start grieving.

I renewed my acquaintance with Unitarian Universalism and eventually was called to the ministry and was able to answer that call. So, my call to the ministry was a complicated process in my life, and involved both betrayal and reconciliation with the faith. I had to come to terms with the fact that this is far from a perfect faith community, just as we are all far from perfect in our own personal lives.

When I finished seminary, although I was called to the parish, I got a call from my former high school roommate, John Buehrens, who at that time was president of the UUA. He asked me if I would come and serve on the staff at the UUA, which I did for seven or eight years. I then ran for the UUA presidency, which was a surprise to me! People kept asking me to do it, and I finally took some time in prayer and decided that I would. I served as president for eight years, and I think we did some good ministry during that time. Then I finally fulfilled my calling to the parish and accepted the call to First Unitarian Church in Portland, Oregon, in 2010. And I have been there for the last dozen years. And I'm just now stepping down.

ML: What you spoke about regarding your disconnection from Unitarian Universalism and then return to it is something a lot of people reading this might be relating to. A lot of people have had bad experiences with Unitarian Universalism, whether on an individual level or on a structural level. What would you say to someone who is looking to repair their relationship with the faith? Further, when thinking of the racial elements of it and the people of color and Black people specifically who have been alienated from UU faith, what do you see as being a good way forward to start the healing and reconnection process individually and structurally?

My leaving Unitarian Universalism arose out of a very deep sense of betrayal because the faith had become very important to me. I was ready to commit my life to it. For that faith to betray me, the betrayal was at a very deep level. The return was also at a very deep level. It came at a time when I just lost my mother and the church reached out to me and said, literally, "We want you to come back. First Unitarian Church in Cincinnati wants to be your church and the church for your family." That was a wonderful, crabby old friend of my mother's.

The return was in the early 1980s. It's a long time ago and Unitarian Universalism has changed. There is more there for more people than there was for me back then. The commitments are in process, but the financial commitment to BLUU (Black Lives of Unitarian Universalism) was fulfilled and not reneged on. BLUU is arriving within Unitarian Universalism now. There are Finding Our Way Home gatherings of religious professionals of color that has been going on now for years. There's more there for more people. We are only beginning to explore, and that’s good news for faith and process. You need to be able to embrace that to be a part of it.

ML: Do you have anything to add about Unitarian Universalism and where we might be going in the future?  What would you have to say to somebody right now who's considering a decision like attending Meadville Lombard and devoting a certain amount of their life to serving this faith?

This is a very complicated time to be trying to predict what the future is going to hold. As Unitarian Universalism and the rest of the religious world and the rest of our world moves out of COVID as a pandemic, into some version of living with COVID and returning to the needs for racial justice and climate... there's a lot that is uncertain right now. It’s uncertain not just for Unitarian Universalism. It's just a lot that is uncertain in our world. That’s even before you get to the politics of the current time.

The people that talk to me about Unitarian Universalist ministry or being a religious professional in Unitarian Universalism, I encourage to do the basics, to be clear on their calling. To listen very carefully to what the spirit is calling them to do and to be, and how the spirit is calling them to show up in the world. Listen very carefully to what gives them joy, because if people are looking for an easy career path, then they're in the wrong conversation, actually.

I've had the opportunity to be a part of the affiliated faculty at Meadville Lombard for the last several years. I served on the board of trustees before that for a number of years. So, I've been around the school for quite a while now. I am regularly and continually impressed with the quality of relationships that are created and sustained within the environment, within the broad container that is Meadville Lombard. It is those relationships that I think are of the greatest value. The educational piece is wonderful, and the formation piece is wonderful, but those relationships with colleagues, with faculty, those relationships will serve folks well regardless of the twists and turns which are a part of all lives. So, my advice is to nurture them and keep them strong.

Rev. Bill Sinkford is well known for his service as President of the Unitarian Universalist Association (2001-2009). His tenure was marked by strong public witness for social justice, support for marginalized communities and renewed focus on spiritual depth. In the spring of 2017, he was called back to the UUA as one of three Interim UUA Co-Presidents. He served as Senior Minister at the First Unitarian Church of Portland, OR, for 12 years until his retirement, with the "Released of Call" ritual on June 19, 2022. Bill served as a board member and board chair and taught as affiliated faculty at Meadville Lombard.